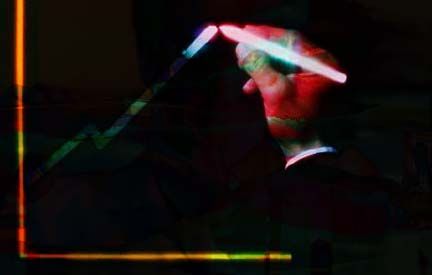 Since it's inception in November 1998, this Website
has been my primary vehicle for showcasing my art.

States of Mine & Other Video/Film Shorts/Performance, 24 July 1990, Tete-a-Tete, Chicago.

The Industry Show, 4 May 1986, The Museum of Science and Industry, Chicago.

Video For Children Of All Ages, 5 June 1985, Record Gallery, Dallas.

States Of Mine/Audio As Experience/Emphasize Repetitions, May 1984, QUBE Cable Dallas.

The Art Of Jamming TV (Five and Over), 28 August 1983, The Center For New Television, Chicago.

In Search Of Divine Attributes: A Time Arts Performance, 3 December 1982, The School Of The Art Institute Of Chicago.

Video: Live/Two-Way/Interactive Event, 2 December 1982, The School Of The Art Institute Of Chicago.